"Of all the mystical treatises of ancient Indian literature, the Avadhut Gita, or “Song Of The Avadhut,” is one of the most eloquent and compelling. Its theme is the unitive knowledge obtained through mystical vision, the knowledge of the eternal Self. This knowledge is not limited to the mystics of any one cultural tradition, but is universal among all those who have attained to mystical vision. Men and women of all lands and all religious persuasions have experienced first-hand the eternal Reality, and realized It to be their own essential Identity. Some of the best known representatives of this universal knowledge are the Upanishadic rishis and Shankaracharya of the Vedantic tradition, al-Hallaj and Jalaluddin Rumi of the Sufi tradition, Shakyamuni and Ashvagosha of the Buddhist tradition, and Meister Eckhart and Juan de la Cruz of the Christian tradition. All have expressed the revealed knowledge of their identity with the one eternal Reality, and declared, in one way or another, their agreement with the words of the Christian saint, Catherine of Genoa, “My Me is God, nor do I recognize any other Me except my God Himself.”...

The Avadhut Gita is a call to knowledge, the supreme knowledge of ultimate Truth. The Avadhut holds out no compromise with illusion, he offers no foothold on separation, he allows no semblance of duality at all to creep into our perception of reality. Perhaps his knowledge is, for mere man, too sublime, too austere, too simplistic; but it is the knowledge of the ultimate, indisputable Truth of existence; and it is this very Truth which has the power to make us free"

"The Avadhuta Gita is an independent treatise on Advaita Vedanta and preaches an uncompromising nondualism. Its authorship is attributed to the Avadhuta Dattatreya. That is why this work is also called Datta Gita, or Datta-Gita-Yoga-Shastra. It is also titled, though rarely, Vedanta-sara.

This little book of two hundred seventy-one verses is divided into eight chapters. The first chapter deals with the nature of the Atman, which is omniscient, omnipotent, and omnipresent; which has no birth, no death, no bondage, and no liberation either. The second deals with the proofs for the same. Duality is born out of ignorance of the real nature of the One. Incidentally, even the great Avadhuta has hinted at the need for a guru (II. 23) in spiritual life. The next two chapters deal with the inner nature of the Atman in a highly poetical tone. The fifth chapter advises a man to avoid all lamentations, as the Atman is the same in all conditions. The sixth chapter negates all kinds of distinctions — whether of caste or family, of senses or their objects, of the mind or the intellect or their activities — because none of these exists when looked at from the standpoint of the Atman. The seventh describes the state of the Avadhuta. The eighth gives a definition of the word Avadhuta by interpreting each of the syllables of that word." 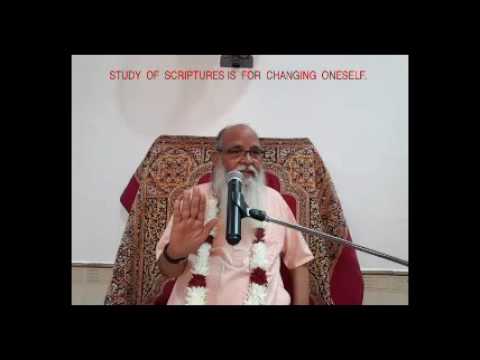